What does the perfect Swiss cheese assortment look like? Discovering is a taste 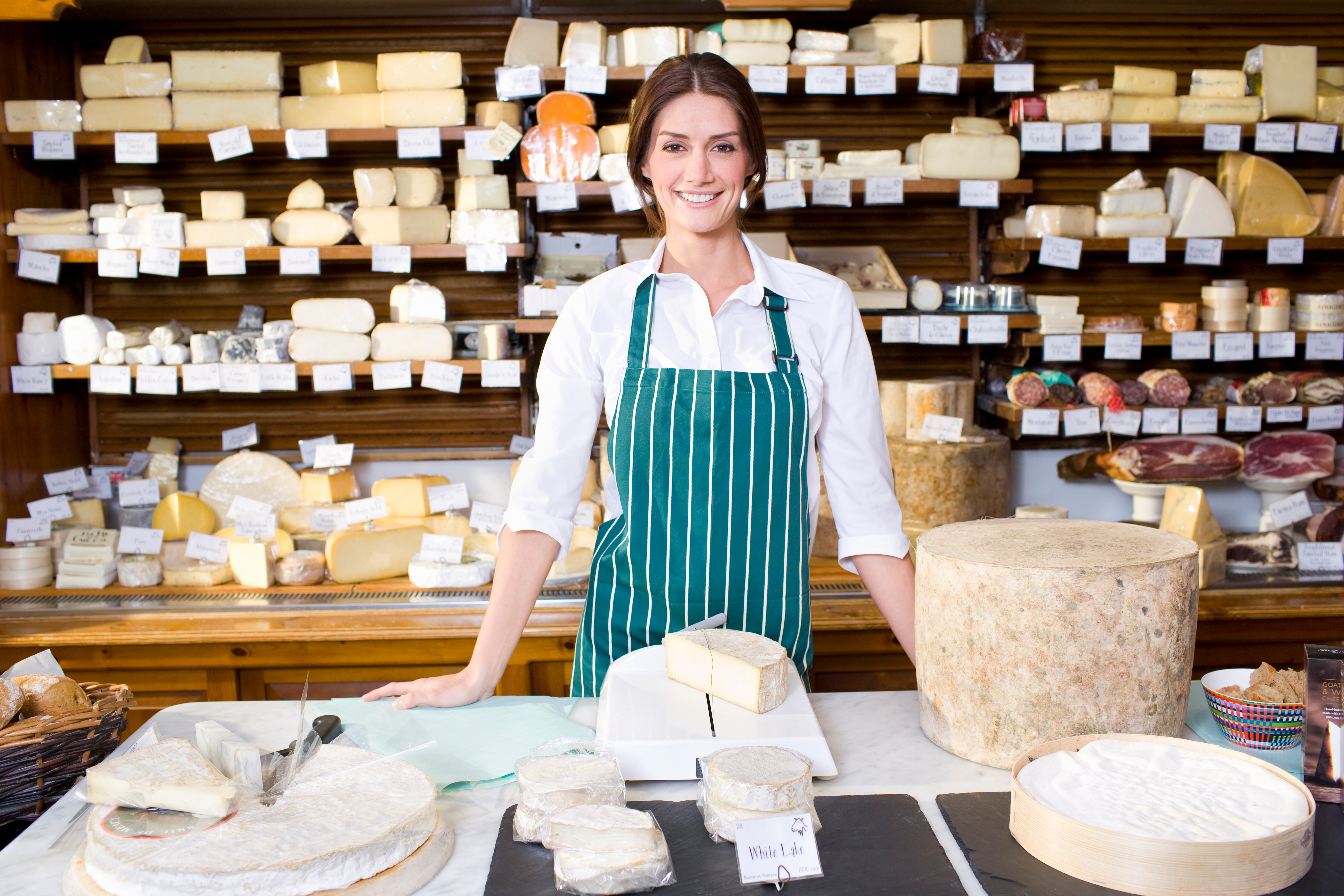 Swiss cheese needs to mature until it is perfect. Building the perfect cheese assortment also takes patience, constant collaboration with the affineur, and an understanding of raw milk cheeses. But it’s worth it! With supportive, informative advice and a mature assortment, you emotionally charge your counter and distinguish yourself. This cheese counter consists of perfectly matured speciality cheeses complemented with rare, unique seasonal offers. And please don’t mind the gap! If a cheese is not available in the desired quality, it is better to have a temporary gap in the range than a disappointed customer.

What does your customer expect?

Surveys have shown that price is not considered important by most consumers, and confirm that customers primarily have the following expectations of a cheese counter:

Advice is paramount; without it, even the most sophisticated range is of no use. With advice that is supportive and responsive to the customer’s preferences, the price is secondary. And the best advice is useless if the quality and selection are not right.

How does the counter positively influence quality? 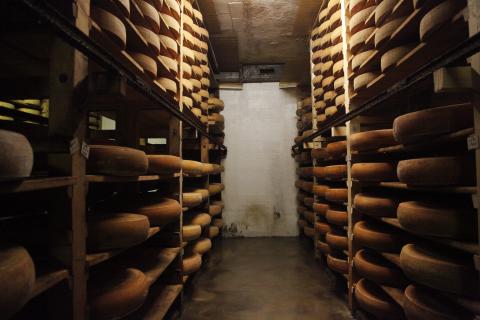 Swiss cheese is usually matured for a long time. Important factors for its quality are the skill of the cheesemaker and the storage (‘affinage’). The most difficult thing is to achieve a continuous, consistent quality – and this is where the trade has a central role to play. Even the best cheesemaker and the best affineur cannot guarantee constant quality if their sales cannot be planned.

I regularly eliminate customers who do not want to understand this. A customer who jumps at every special offer and constantly re-lists affects the consistency of quality for all other customers; I prefer to do without this customer and satisfy the others instead. Nevertheless, I can sometimes run out of cheese, and the rule is: I’d rather have a temporary gap than a disappointed consumer.

What influences the assortment?

It is not possible to determine an ideal, generally applicable assortment, because the selection depends on many different factors. I will only mention the most important ones here.

A central question is the counter’s location. Here, it is important to distinguish between purely geographical information and the habits and purchasing power of the customers. The geographical information is important in order to know which varieties are known in the country or locality. For example, Appenzeller is not known in Italy, but in Germany it is one of the leaders. With Emmentaler Switzerland, it is the other way round.

The question of habits and purchasing power is important in order to meet the consumer’s tastes and to create an offer they can afford.

Other important influencing factors are the positioning of the counter, its size, and the goals you want to achieve. Is the cheese counter more of a complementary offer that you have to have in order not to be seen as a service desert, or is it a central profiling element?

If the counter is a central profiling element, it offers the consumer the opportunity to discover new things and it has an individualised offer. The big brands should play a secondary role in this cheese counter; the consumer can also get them from the self-service shelf.

The six categories of Swiss cheese

These can also be found in almost every discounter. They are strongly price-focused, and profiling opportunities lie only in the price. For a counter that is seen more as a complementary offer, it makes sense to stock these cheeses. The retailer is then not perceived as a service desert, but as a local supplier that offers the most necessary items.

Counters that are a central positioning element – those that want to radiate competence and offer an experience – should only offer these cheeses in self-service. The reason for this recommendation is: no matter what you do, it has a negative effect on your business.

The big Swiss cheeses are:

In addition to these AOP products, there are of course the manufacturer brands that everyone knows.

Most AOC cheeses are also flower meadow cheeses made from untreated raw milk, although there are exceptions that also allow bactofugation or microfiltration. In the case of the ‘big’ brands, we increasingly encounter industrially produced cheeses. 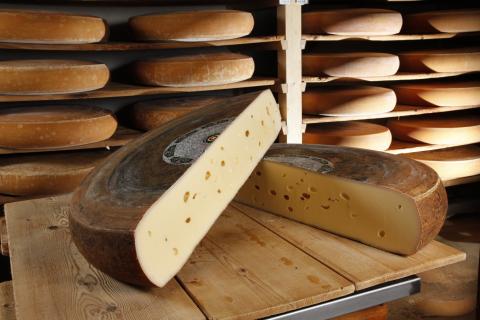 There are different brands, better and worse, matured for 8, 12, 14 or 18 months. Most of them are sold primarily on the basis of price and are widely distributed. One exception is Emmentaler Switzerland moist-aged, which occupies a small niche.

Lately, I’ve noticed a trend to store certain cheeses for too long. A Gruyere is no better after 36 months than it is after 14. On the contrary; to store it for that long, I have to affinate it in a cellar that is too cool. This means the cheese loses its character, without developing any more flavour. I prefer to use an Alpine cheese and have a cheese with character that is even rarer and tastes good.

With affinage, you can’t cut costs without sacrificing quality. A simple measure is to lower the storage temperature, which reduces the risk. The effect is that the cheese loses its creaminess and becomes brittle and hard. Substantial price differences in aged cheeses are always at the expense of quality, or are the result of short-term over-storage.

For me, only flower meadow cheeses made with untreated milk belong in this category. Bactofugation or microfiltration, which are necessary for silage milk, have no place in speciality cheeses from Switzerland. Both treatments result in the milk, and thus the cheese, tasting completely neutral, so the whole character of raw milk cheese is lost. This milk is usually still pasteurised, which is not obligatory. For example, there are Swiss raw milk AOP cheeses that do not exclude bactofugation or microfiltration in their specifications, and these procedures are sometimes done. Such treatment of the milk does not have to be labelled and this information is deliberately not passed on.

Even if you leave out the cheeses with treated milk, the choice is huge – and so is the variation in quality. Not everything that is sold as a speciality is worth its price. The most difficult thing is to guarantee a constant quality. Because these specialities are produced in small quantities, stocks are limited. When sales are high, the cheese gets younger and younger, and when sales are low, it gets older and older. To avoid this, the producer has to choose their customers wisely and consistently sort out the ones who do not order regularly. This is the only way to build up a high-quality assortment in the long term.

Now you know the secret of how the von Mühlenen family has managed to offer consistent world champion quality for decades!

Available from Affineur Walo in this segment are: 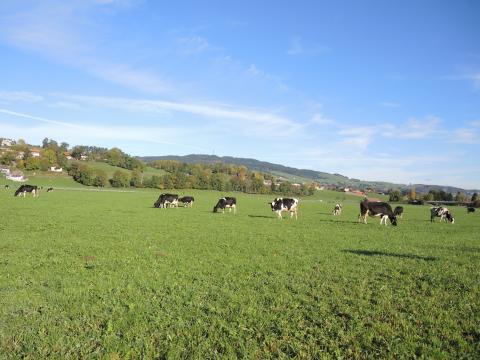 In Switzerland, mountain cheeses must be certified; they may only be made with milk from mountain regions. There are many mountain cheeses that are made as flower meadow cheeses from untreated raw milk. However, there are also some large to exceptionally large cheese dairies in the mountain region that process only (or almost only) silage milk. These cheeses are then offered in large quantities at favourable prices.

In the case of mountain cheeses made from untreated raw milk, production is usually small and demand is high. This is a pity, because the cheeses are usually sold too young. In order to maintain a continuous supply, it is even more important here that the producer selects his customers very carefully and consistently weeds out opportunists. My motto is rather ‘sell less, but at constant quality, and do not disappoint the consumer with every third delivery’.

There are great differences in mountain cheeses. Since nothing is regulated except the origin, this cheese can also be made from silage milk. In this case, the milk is bactofugated or microfiltered, and usually pasteurised. Then not much of the character remains. 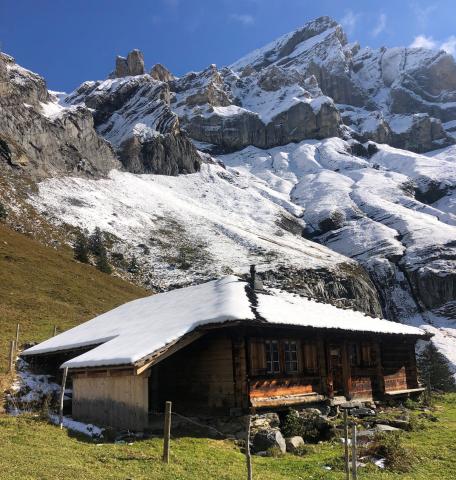 From October, the Alps are at rest

Now we come to the freestyle cheeses, which only a very few counters have mastered. Alpine cheeses are also certified and may only be produced on Alpine pastures in summer, from June to October. The cows are fed only pure, fresh Alpine herbs and clear mountain spring water. The production is often very traditional, on the open fire, and this gives each cheese a special character. This interaction of the Alpine herbs with the spring water and the open fire is unique.

I don’t know of any Alpine dairy that doesn’t produce flower meadow cheese from untreated raw milk. The reason is simple: it makes no sense to transport silo fodder to an Alp when the cows are in the meadows.

The production batches on the Alps are small, the differences in quality are huge, and the demand exceeds the production many times over. Most of the time, these cheeses are sold within a radius of a few kilometres and never reach the lowlands, or are exported.

Due to the scarce availability, Alpine cheeses have to be reserved in advance; this is the only way to guarantee good, mature quality. Since the cheese is only produced in summer, it is a good idea to offer these cheeses seasonally. It is important that this is repeated regularly so that the consumer gets used to it and will wait impatiently for the next offer, even if it takes 12 months.

Affineur Walo offers an individual and comprehensive range in this segment; a few examples are:

My logo for organic cheese

The organic segment is growing rapidly, and you can find the big brands almost everywhere. In the beginning, almost the only organic cheeses available were made from silage milk, and the reason is obvious: silage milk can be transported without any problems because it is microfiltered or bactofugated and pasteurised before processing. This makes the milk neutral and the cheese loses its character.

The conversion of raw milk cheeses takes much longer. This milk can only be transported to a limited extent, and therefore the whole village has to convert to organic so that good organic production is possible. Today, the large, well-known AOP raw milk cheeses are available in sufficient quantities and unfortunately a price war can already be observed here.

A real profile is only possible through matured variants of the big varieties, or through specialities. Here, too, a producer who wants to offer consistent quality must select his customers very carefully.

The following are available from Affineur Walo with appropriate planning:

Do you have any questions or suggestions? Would you like us to help you build up your Swiss cheese range? My partners and I welcome every comment.

«more than a taste»